What is the William Street Bikeway? 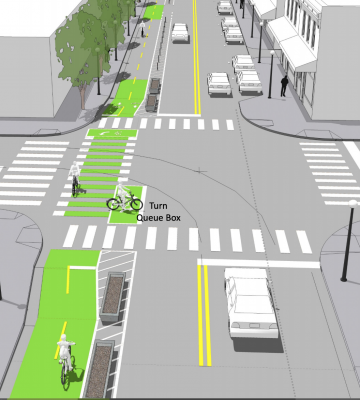 Set to be unveiled sometime this coming fall, The William Street Bikeway will create a protected bike lane for cyclists looking to bike into downtown for fun or for those who commute into downtown or to the University of Michigan Central Campus from the surrounding neighborhoods.

It is the Downtown Development Authority (DDA) of Ann Arbor’s latest initiative to support commuter and recreational bike ridership in downtown Ann Arbor through their “people-friendly streets” campaign!

How Will A Protected Bikeway Benefit Life In Downtown Ann Arbor? 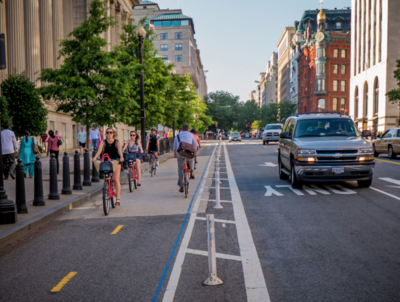 Protected bike lanes result in 39% fewer vehicle/bicycle accidents and 59% fewer overall injuries for bicyclists. In a study conducted by Breakaway Research Group for People for Bikes in 2015, the majority of Americans said they wanted to bike more but 54% cited a fear of getting hit by a car as something that holds them back. Today, when discussing the benefits of commuter bicycling in America, we often reference cities like Portland, Oregon which has the largest percentage of bike commuters in the country, with an average of 6.3%, a number that is exponentially higher than the national average of 0.5%. One of the reasons so many individuals choose to bike to work in a city like Portland, however, is due to the city’s commitment to safe and comfortable biking for their residents. 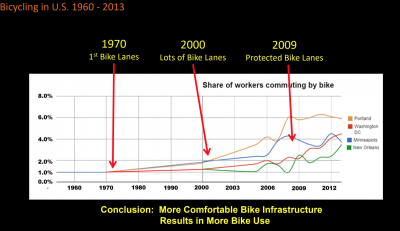 In a survey conducted in 2013 on the cities of Portland and San Fransisco, California respectively, researchers found that 70% of Portland residents and 80% of San Francisco residents were “very” or “extremely” concerned about bicycle safety and, according to Portland’s bike planning coordinator, 60% of bicyclists said they would like to ride more but they were afraid to ride. Since then, Portland has doubled down on their efforts to create safe bicycle lanes on their streets. They already have 385 miles of bikeways with more than 95 more miles already funded.

One of the main goals of the William Street Bikeway in Ann Arbor is to increase safety for bicyclists, pedestrians, and motor vehicles alike. In the example of Portland, increasing bicycle access to busy downtown areas increased the number of people willing to commute and bike recreationally in their city. The DDA in Ann Arbor is following in the footsteps of progressive cities like Portland by setting a standard of safety and comfort as well as creating a downtown that is focused on people of all ages and abilities being able to confidently walk, drive and bike downtown on a daily basis. 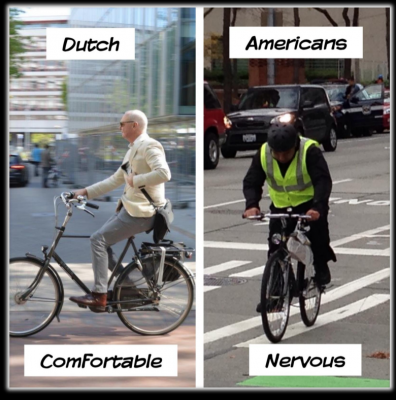 An increased sense of safety and comfort for bicyclists will also hopefully boost business activity downtown. With more people feeling safe and comfortable to ride their bikes into downtown, they may be more willing to bike to local shops or to dinner at one of Ann Arbor’s fine downtown restaurants. With fewer cars and wider pedestrian and bike lanes, Ann Arbor’s downtown can be transformed into a walkable, enjoyable downtown district!

While protected bikeways are new to Ann Arbor, they are already utilized and benefitting cities throughout the world. In Copenhagen, Denmark, for instance, elevated, protected bikeways transformed their congested, vehicle-heavy streets into ones bustling with pedestrian traffic, outdoor cafes, and an overall comfortable and fun urban feel. This not only benefitted residents who wanted to bike more but local businesses and the Copenhagen economy alike. These days they are considered one of the highest standards in the world for improving cities in a way that puts people first and promotes bicycle traffic.

Another factor that cannot be understated is that increased bicycle use is good for the environment! Fewer cars on the roads reduce carbon emissions which is not only good for our planet but also good for the health and comfort of those spending extended periods of time downtown. By committing themselves to support commuter bike ridership, the city of Ann Arbor, through their people-friendly streets campaign, hopes to send “a clear message” that Ann Arbor is “a bike-friendly city” committed to “a green design”.

In 2015 the Institute for Transportation and Development conducted a study on how increasing commuter bicycling would affect emissions output in U.S. cities. They found that “in a scenario where 14% of travel in the world’s cities is by bike or e-bike by 2050, carbon emissions from urban transportation would be 11% lower”. They identified that, in order to reach these goals, U.S. cities would need to commit themselves to promote bicycle travel. The city of Ann Arbor is doing exactly that by constructing a protected bike lane that will allow more bicyclists to feel safe commuting on Ann Arbor’s busy streets! 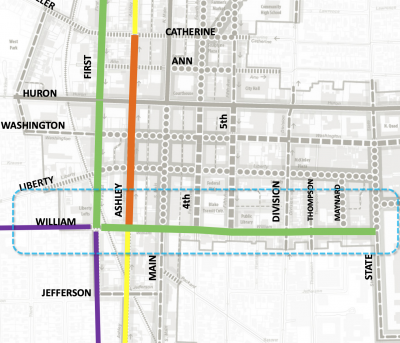 One of the other stated goals of the William Street bikeway is that it will be the first step toward creating an infrastructure of bike lanes in Ann Arbor that will connect downtown to the University, where many students and faculty ride bikes every day, as well as to surrounding neighborhoods.

There is no doubt that creating a network of interconnected bikeways is a large undertaking from a construction and traffic standpoint. Anyone commuting through downtown Ann Arbor this summer has experienced the backups and tight squeezes associated with the many construction projects going on there. However, the results of these projects will benefit downtown Ann Arbor, its residents, and visitors exponentially!

Connection to The Treeline Urban Trail:

Lastly, one of the most exciting aspects of the bikeway is its proposed connection to the Treeline Urban Trail. This trail is yet another bicycle promoting project that the City of Ann Arbor and The Department of Parks and Recreation are undertaking in hopes of creating a walking/biking trail that will run along historic Allen Creek and the Huron River. This trail will hopefully connect to the nationwide B2B trail as well!

In 2003, the city of Ann Arbor, in partnership with the DDA and their people-friendly streets project, committed themselves to support commuter and recreational bike ridership. William Street was chosen specifically by an advisory committee which determined that it was a “bicycle emphasis street”, which means that it was identified as a street that should have some sort of bike lane due to heavy bicycle traffic. While there were other streets identified as bicycle emphasis streets too, William Street was determined to be the most feasible street on which to construct Ann Arbor’s first protected bike lane

Overall, while the wait may seem tedious to those driving, biking, and walking through downtown this summer, when the William Street Bikeway is unveiled this upcoming fall, we agree that it will definitely have been worth the wait for Ann Arbor residents and visitors alike!

For updates on the William Street Bikeway and more information on other projects that are underway in the city of Ann Arbor visit: a2dda.org, peoplefriendlystreets.org, or www.a2gov.org