Gary Keller and Jay Papasan, along with Ruben Gonzalez and Adi Pavlovic from KW Research, delivered the annual Market Update at Mega Agent Camp in Austin, Texas, on Thursday, Aug. 11. The conversation began with a look at the current state of the market and the numbers that drive the industry, and then explored other issues that are also impacting the market.

The housing market goes in cycles. During the growth portion of the cycle, prices are going up and inventory levels are typically low, but growing. After the market shifts, prices begin to decline as inventory levels reach a peak and then start to decline. Where are we right now? “Trying to guess the market is a fool’s game,” Keller said. So, rather than trying to predict the cycles, he took the opportunity to share the important information that’s truly needed. 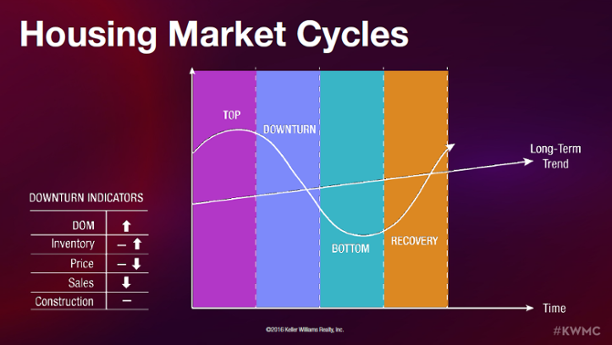 The Numbers Driving the Market

Keller Williams is currently on pace to sell 5.6 million homes this year. There have only been three other times in U.S. history that we have been higher. However, sales are slowing in some markets as affordability becomes a serious issue.

We are now seeing many markets split by price point. Entry-level homes remain in a seller’s market, while some luxury and move-up markets are showing signs of shifting.

Inventory is currently holding steady, and we are still in a seller’s market. But it won’t take much to push it into a buyer’s market.

Currently, mortgage rates are one step away from being the lowest recorded interest rates in U.S. history. This is what is driving affordability as people aren’t earning more.

So as home prices continue to rise, mortgage rates remain low and price gains remain in the sustainable range for the majority of 2016, things are looking good for now. But Keller and Papasan reminded the audience that the last time we saw numbers like this, it was before the Great Recession.

The three areas impacting the U.S. economy the most – gross domestic product (GDP), unemployment and inflation – were discussed next.

Currently, new home construction is focused more on higher-end priced homes, which may have some impact in the future if there aren’t enough buyers who can afford to purchase.

This lack of new home construction in the entry-level price range is contributing to inventory shortages in many cities.

What to do with this Information

With the market at its healthiest in nearly a decade, now is the time to talk with an experienced real estate agent about what could be the best next step for you. Remember, shifts are going to happen, but you can minimize your vulnerability by taking actions now that will help you thrive, not merely survive, when the next one occurs.